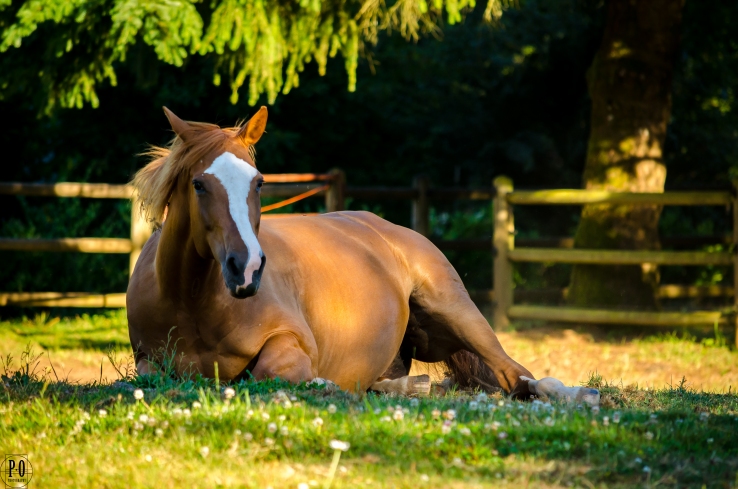 I have always loved horses for their natural beauty, grace, and power.

Though I don’t have much experience with them, I think everyone can appreciate their majesty and grace. So, when I was recently referred to a horse owner, I could not pass up the opportunity to shoot photos of such a magnificent animal up close and personal.

Before I began the photo session I spent some time talking with the owner. I learned that the horse you see here is a Thoroughbred Hanoverian, and despite the breed’s large presence, it’s actually an athlete and its sport is Dressage, which is an Olympic event.

Now the horse spends most of its time eating and relaxing in a beautiful meadow, the good life of an animal well cared for.

We started with some shots in the stable where I was told that pointy ears meant interest and flopped ears meant boredom. Hard to tell here.

Next was some galloping time in the ring and then on to the meadow where I was left alone with the horse. At first it was like any photo shoot, and we had to spend some time getting used to each other. Once the horse figured out that the camera, monopod, and I were not a threat, she relaxed and began to be herself. This meant mostly eating . . .  lots and lots of eating.

But every once in awhile she would do something spontaneous like gallop, roll and scratch her back in the grass, or calmly strut about with her head up. This is what I was waiting for: chances to capture the spectrum of her character intimately.

The late afternoon and golden hour lighting was perfect, but also challenging, because there were intense highlights and shadows dotted throughout the landscape.

Of course the horse would do whatever she wanted, so there were many key moments in both sunlight and shade.

It wasn’t necessarily easy, but it was a pleasure, and, as I think you can see, it made for some wonderful photographs. The horse is also a sweetheart, and it was my pleasure to spend a warm summer evening with her.