Customary iPhone snapshot. Ace pilot on the right, with yours truly. 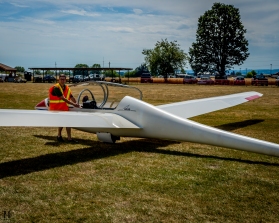 The Grob, the star of the show. 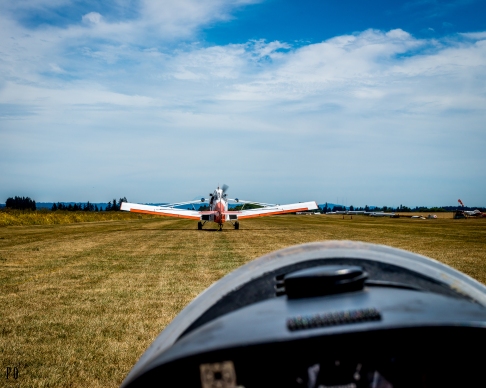 Coming in for a smooth landing. The red thing was tethered to the outside of the canopy, presumably there to indicate wind direction.

A few months ago I stopped in to visit the Willamette Valley Soaring Club in nearby North Plains, OR. At the time I shot off a few snaps and shared them here on the blog, and told the crew that I would be back for a ride. Well, I finally got around to doing that recently and what a stoke of an experience it was!

There were a small amount of nerves at first, and I’m not sure it would be normal to not have some butterflies, but I was mostly just eager to get up. For awhile I was more worried about getting the ride in at all, because one thing during the summer that could shut it down for the day is high temperatures. No AC here, these cockpits get hot! Luckily I was able to soar before that happened.

Naturally my camera came along for the ride too. It’s tight in a glider cockpit, so I decided against a telephoto lens and brought a 50mm prime lens with my Nikon 610. I figured the natural perspective of a full frame 50mm would look good.

There was little choice but to go up mid-day and just deal with hard light conditions. Gliders do not have lights, so dawn or sunset/night rides are usually not permitted. The club is open from 10 – 6. Given that introductory guest flights are on a first come, first serve basis and that 6:00 PM might as well be noon here during a Oregon summer it was always going to be hard daylight… unless it was overcast, but we get enough of that during the winter and I just wanted to fly.

So knowing all of this, the choice of 50mm prime lens and polarizing filter with a hood was the logical choice. Aerial photography from a glider isn’t easy. The glider is of course moving and there is rising hot air providing the unexpected bump on occasion. The glare from the canopy is mitigated by the polarizing filter, but it’s not perfect, and there was a little bit of smudge on the canopy. If I was there for a scheduled professional assignment, I would remember to wipe down the canopy before take off.

The landscape was beautiful and photos to the west were better because the sky was a deep blue in that direction. For a few minutes after we detached from the tow plane it was smooth and peaceful for us. Hopefully I captured that for you with the aerial photo you see above. It does it for me.

After that we found a “lift”, or what is basically rising warm air. This is the thing all glider pilots look for. It’s part sky-surfing and slow burn roller coaster… at approximately 3000′ or sometimes higher. We did at least five full circles while rising 200-300′ in altitude to the top of the lift, all in a few minutes but it seemed faster. After this ascension I felt a bit woosy, but sometimes a head spin makes for good photo shooting. This is when I captured the cockpit POV shots in the air and when approaching the landing strip. Both are my favorites.

I’m by no means a professional aerial photographer (my insurer might get a bit nervy), so I was just hobby shooting on this day. But I like what I captured and had a great time. We all love an occasional photo walk for fun and creative purposes, but perhaps next time you’ll enjoy a photo soar instead.

Many thanks to the good folks at the Willamette Valley Soaring Club, who were all friendly and welcoming.