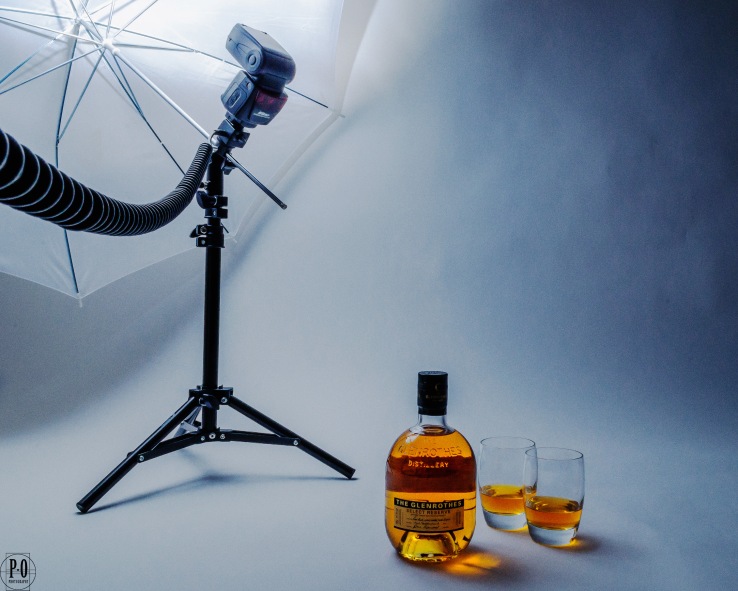 A good photo exercise is to browse through a magazine and pick out advertisements that catch your eye. Then take it back to your home studio (or big studio, and if you have one of those you’ve probably done this exercise) and try to replicate it to the best of your ability and equipment available.

As you can see, a The Glenrothes Scotch Whisky ad caught my attention. The photo was a slick-looking still life of the bottle and two small stemless glasses on a seamless white background. The image was likely Photoshopped and then formatted for magazine print. My guess is it was shot with a medium or high format camera, the reflection in the glass looks like a view camera. It’s a high-end photo, very well done.

Obviously the light stand, speedlight, and umbrella were not visible in the ad  – the photo above is just me being cheeky after taking still life photos on a rainy night :).

My attraction to a spirit advertisement, and what should be yours too regardless if you drink, is to practice with shiny reflective surfaces and translucent products. If you can get the lighting for that down, you should start feeling more confident when it comes time for you to photograph Mrs. Johnson’s cat.

What I liked about the ad specifically was the shadow coming from the bottle and glasses. Similar to the photo above, there was a rear 45-degree light making the whisky translucent and the shadow center an orange hue. This is what I wanted to duplicate and it seemed relatively simple enough.

Well, none of my soft tungsten home studio lights did the trick. The shadows, once mixed with the window light at my place, were too muted. This is where the speedlights came into play. Nothing funky, just used TTL, but it worked. And in that 1/100th of a second it didn’t seem to care about the side window light.

One thing though, don’t use a cord. Get the radio slave. It’s so much easier. In my opinion, a cord is really only good for about 4′ of stretch before the light stand teeters (or at least this lightweight stand anyway).

As an aside, after running this photo through Lightroom for the standard adjustments I decided to play around with Google Nik software. I like it, particularly the B&W Silver Efex Pro. If you don’t mind the expense it’s a nice addition to your bag of tricks. At the very least there is a free trial and it’s worth a look. 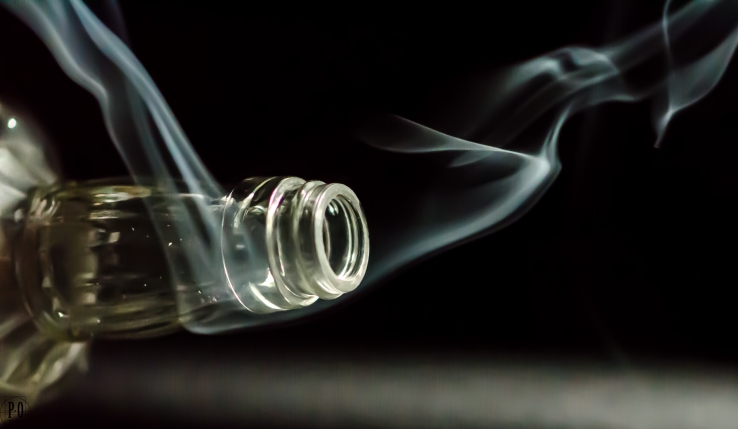 Empty bottle, a friend I used to know from many years before. Somehow you’re still around. Let me make some good use of you then. 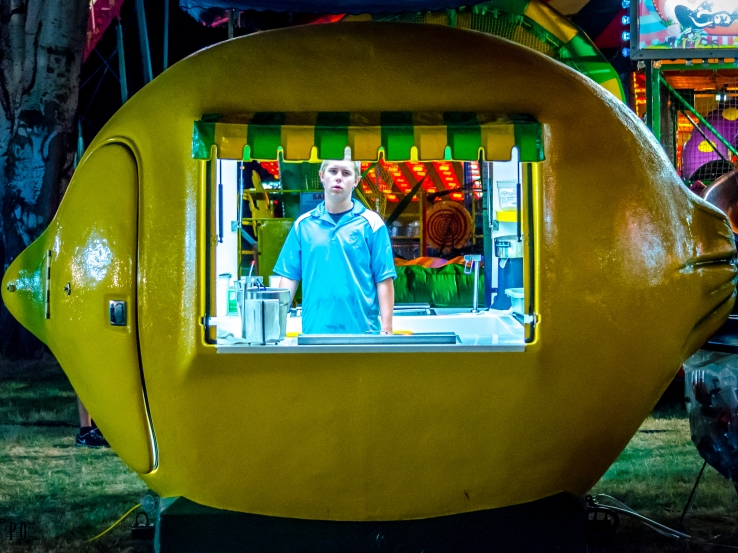 I was looking through my “extras” file of photos taken over the summer and this night shot of the Washington County Fair gave me a good laugh. Not much else to say, other than dig the sneakers making a cameo on the lower left and his expression is rather priceless given the circumstances. 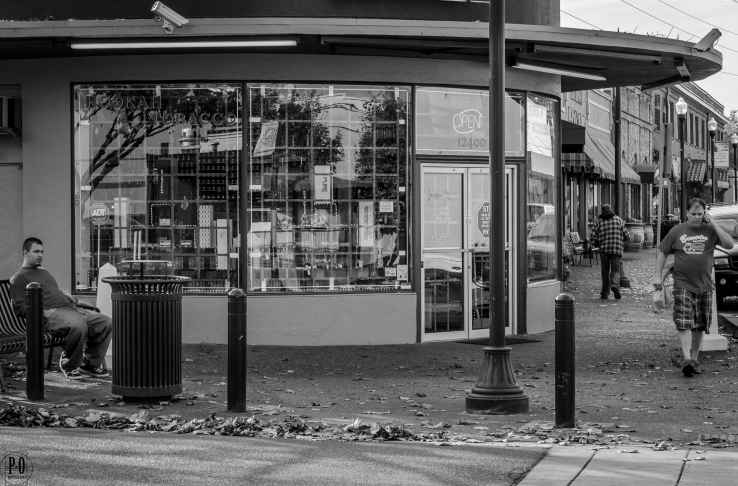 Three men, going in different directions. I wonder what was on their minds? 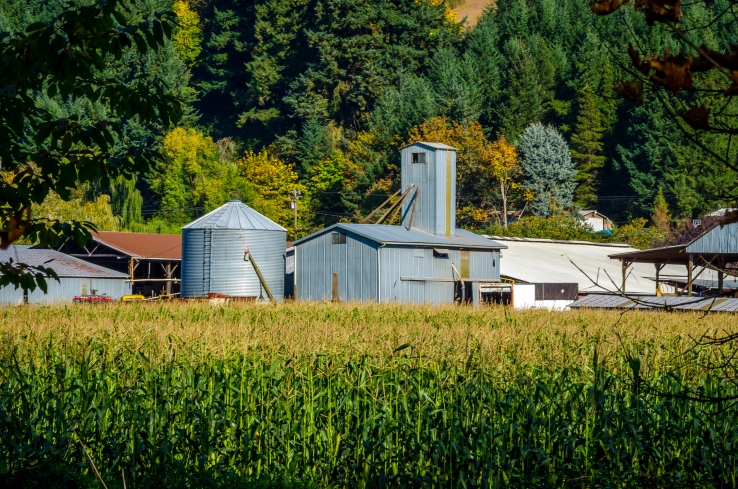 There are photography assignments, pet photo shoots, and student work. All of them are worthwhile and keep me plenty busy. But every once-in-awhile I have to go back to my roots in photography and just walk somewhere with a camera in hand. I don’t over think shot selection or composition. I just stand in places that intuitively seem right and get the exposure. It’s not quite random snap shooting or photojournalist style, although both can be fun, but it’s certainly photography for pure enjoyment and freedom in the moment.

Lately the autumn weather has been wonderful here in the Portland, Oregon area and so last week I decided to take an afternoon photo walk on the Banks Vernonia trail. I had recently acquired a new 85mm f/1.8 lens, and knowing its best function is for portraiture I wanted to see what else it could do. As I said above, I just shot when it felt right to shoot. Whatever could fit into an 85mm frame is what I captured.

The photo of the silo you see above is my favorite from the photo walk. I like the layering and the lens’ ability to shoot for moderate depth-of-field with a bright sun front light. I’m also a sucker for trees, especially during autumn. 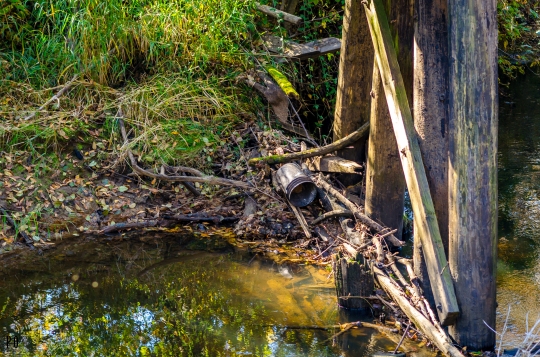 Here is another shot I like from the walk, but not for any technical reason. It’s a nice stream in a picturesque area that has a bit of mans laziness and ingenuity mixed in with the natural driftwood. The title of this photo is “Driftwood Bucket” for that reason.

It’s always nice to do a photo walk simply for the experience.  I highly recommend that you do the same on occasion.